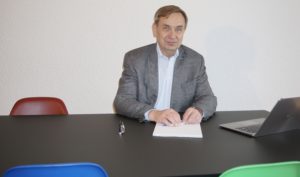 When working as a patent attorney, I am fascinated by the precise technical and linguistic assessment of subject matter in the fields of electrical engineering, computer science and mechanics.

I have been working as a patent attorney since 2003. First from 2003-2018 at a total of three different law firms in Bern and Zurich. Since 2018, I work as an independent patent attorney.

From 1981-1986 I studied electrical engineering (MSc EE ETH) at the Swiss Federal Institute of Technology (ETH) Zurich and completed a diploma thesis on the residual resistance of superconducting conductor connections. From 1986-1988 I worked as a lecture assistant and lecturer mainly at the Institute for Signal and Information Processing at the ETH. From 1988-1994, during my PhD thesis (Dr. sc. techn. ETH) on the signal processing of the surface myogram, I gained in-depth knowledge in the field of signal processing algorithms and their programming on large computer systems (Cray, Convex).

After a research stay at the University of Maribor (SI), I was responsible for SWITCH (Teleinformatics Services for Teaching and Research) as System and Security Administrator (UNIX Solaris) from 1995-1999 and for the Institute of Terrestrial Ecology at the ETH Zurich from 1999-2002 as an informatics coordinator as well as in the field of scientific computing (modeling water transport).

From 2002-2003, I completed postgraduate studies in intellectual property at the ETH (MAS ETH IP), with stays in Germany, France, Japan and USA.